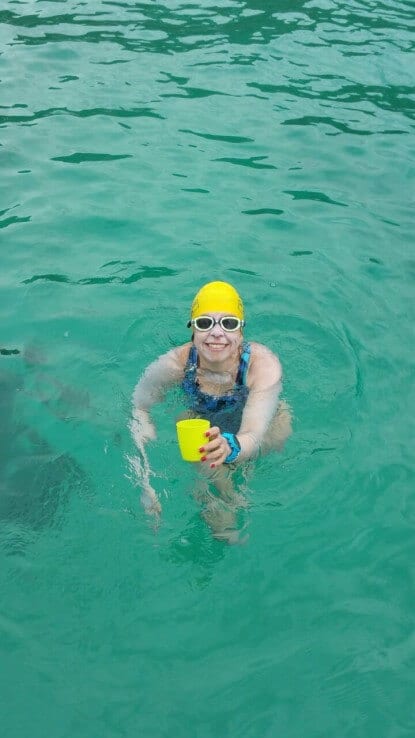 It’s a long way from Tel-Aviv to Mallorca. 2 flights, 3 hours connection time, 2 taxis, 2 loving friends, one sea snail (me!!!) wishing to become a dolphin when I grow up.

Few months ago a friend suggested that I’ll join a relay team that he’s organizing.
A short brief- the English Channel swim is a honorable challenge, that is concord by man for over a 100 years. About 2000 people did a solo / relay swim, about 30% of people climbing the Everest mountain. Few died while trying.
Why it’s so difficult:
1. Water temperature- about 15 degrees. Cold. You’re not allowed to wear any worming accessories- no wet suit, only one silicon cap. Much cooler than in Tel-Aviv. The rules of the channel doesn’t allow you any warming clothing- not to say – only a thin bathing suit, and one silicone cap.
2. Sea transportation- the channel is not a quiet lake. There are 100’s ship, tankers and so. You must be escort by a boat.
3. Jellyfishes – unbelievably many. The only comfort is that if you continue swimming- the cold water will ease your pain.
4. Water conditions- changing current makes your swim anything from unpredictable to impossible. The distance in airline is 22km. Most people do 30-40km, but it can go up to 60km. Many people were just pulled out of the water since they were drifting  out of track.

So – what am I doing here?
I’m a slow and weak swimmer, a sea snail, how comes I’m playing in the big children’s pool?

A year ago, I was lucky to get acquainted with a group of strong long distance open water swimmers – SAFSAL. The meaning of the group’s name is “bench” in Hebrew, since there meeting’s point is a bench in the north shore of Tel-Aviv. 6 of them made a relay cross of the English Channel last year, and other 4 intend to do it again this summer. They asked me to join them.

So I find myself in a swimming preparation camp for the big channel, accompanied by some really great swimmers. The goal of the first day is acclimatize to the cold water. Swimming in 15 degrees water for 20 minutes.
It was cold. It was 12 to 14 deg…
Took me about 10 minutes just to start breathing again, but when I started enjoying myself, I was stacked by a group of brown jellyfishes.

That’s the first time that thinking about my swimming technique or meditating and swimming WEST didn’t work, you feel the pain and it doesn’t go away….
Well, I’m still alive to write about it.

I’ll start my story today in the night before.

After swimming for 2 hours, the third day was supposed to be a long one, with a 3 hours swim in the morning, followed by 2 more in the afternoon, which is a wonderful preparation for the big 6 hours swim.

God had different plan for me. The forecasted weather made us to swim the 6 hours on the third day, after a very short unexpected preparation.

Today we’re taking the boat. The sky is cloudy, the cold wind getting under your worm clothes, everyone is a bit nervous. “How am I going to swim 6 hours, I’ll make it 4, for sure I can stay for 4 hours”. Putting back the voices that are trying to remind me the very little acclimation was done.

Even undressing is awful in that weather..windy cold..no sun. After long preparation – sun block, Vaseline – I’m climbing down the ladder, and I’m in the coldest water I’ve ever experienced. “It’s not that cold”, I’m telling to the guys on board. Lying to yourself is one thing, but they know I’m freezing.

My first hour was ok. Thinking about my wonderful children. They’re so brave. I’m letting them warm me from the inside. The second hour was much harder, I began to shake, and decided to quit after the 2 hours of the qualification.

I was on the boat, took me  an hour to stop shivering. But then I took a decision to try another hour. And made it in the cold water

I was devastated by my failure. No comfort. Until now, I know that the only thing that I can do is to come back next year and make the six hours. I can do that.

To be continued with another swim WEST 1 leg Ilanit Yurman…