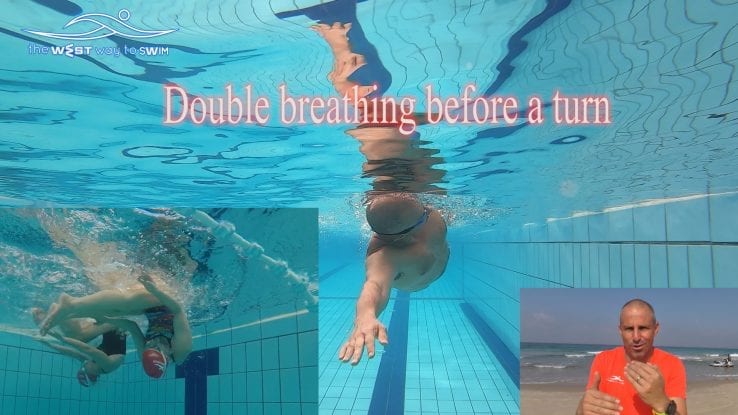 Double Breathing Before a Flip Turn – How to use it to swim faster?

Is it right to double-breathe before the flip turn, or will it just slow us down and hurt our neck?

Before we begin, you should know that if you don’t control breathing every three strokes, and haven’t perfected your swimming style, you will have difficulty performing the double breathing.

The key question to ask is – do you have enough air before the flip turn and can you easily breathe one stroke after the flags (flags are located 5 m from the wall)?

The answer for most swimmers is that they don’t have enough air. Of course, this is not true for Olympic swimmers, but for Masters swimmers, even though Olympic champions and world champions sometimes use the double breathing to get more air towards the end of a swim, when competition is fierce, etc.

How did Simona Quadarella swim in Italy and how did she win the 1500m swim at the last World Championship in 2019?

Simone breathes every 2 for 4-5 reps, switches to breathing every 3 to change sides and breathes every 2 to the other side. In this way, on the one hand, you maintain a symmetry of the two sides, and on the other, you get enough oxygen to your lungs and muscles to swim faster.

The Chinese Sun Young, Olympic champion for several times and world record holder in 1500m freestyle, swims in exactly the same way, and would perform the double breath several times in the swim.

How long does it take to learn to flip turn if we have been swimming without performing it?

Flip turn requires us to work in hypoxia – swimming with oxygen deficiency. The Flip turn’s advantage, if performed correctly and according to age, flexibility and pain levels, if any, is that it causes relaxation and extension of the lower back after exiting the wall. If not done correctly, it can easily cause oxygen deprivation, neck pain, knee injury and more.

Learning the flip turn in the WEST technique is very easy, and it takes about a month and a half to assimilate the turn. The first three weeks you might feel like you have no air, and the swimming rate is a bit low. After a month you feel that there is more air, and the swimming rate returns to what it was, and after a month and a half, if you do not give up, you will both improve the speed and also get significantly more oxygen to the muscles.

How to maintain the neck when doing double breathing?

The most important emphasis in WEST swimming is maintaining the neck and back, so when we go out for breath we are only allowed to do “yes” and “no” with the head. This means that the neck movement while breathing is very small, and what moves the head to the side is the gliding, rather than the core muscles, as they do in the competitive swimming.

Timing your breathing according to the WEST technique varies from person to person depending on flexibility, buoyancy, and gender, so the more flexible and buoyant we are, the more we can time our breath toward the end of the stretch, whereas if we have medium flexibility we will start to roll the minute our palm touches the water.

How many times is it recommended to double breathe within 800m in a long pool (out of 15 turns)?

It’s important to understand that double breathing can also stop us, so we won’t use the technique if we don’t have to, and we will always try to make at least one full stroke before the flip turn, but towards the last third of the swim, when the pulse gets higher, double breathing can be used.

In life, in general, we should get a toolbox, work on different muscles and develop our breathing.

It is strongly recommended to control and use double breathing every now and then, as you will occasionally need more air, and this tool will give you the extra air, and even make you swim faster.