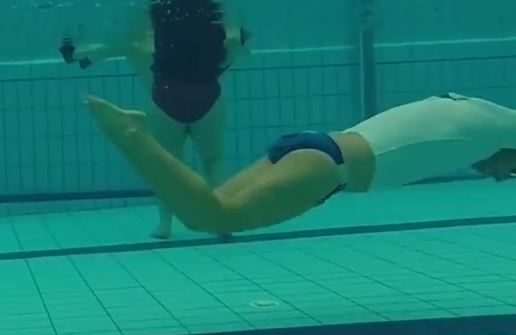 How does a dolphin go?

How to learn the dolphin kick in 5 easy steps and treat you lower back on the way?


The dolphin kick in competitive swimming changed the face of the swimming world; swimmers are working on their core muscles more and more, female swimmers who are not that tall can find their way to the top charts, and from 1988 in backstroke and 1998 in butterfly and freestyle swimmers are forbidden to swim more than 15m underwater using the dolphin kick. The reason for this is very clear – we would have started seeing dolphin competition instead of the different styles. Ryan Lochte, one of the fastest dolphin kickers in the world demonstrated in practice swimming 50m backstroke in 20.8 seconds, and he can no doubt beat the best swimmer in the world in freestyle thanks to his dolphin kick alone.

Still, frequently asked questions in my videos are:

In this article we will discuss 5 drills to learn the dolphin kick while preserving the neck and back.

Perform each drill for 2 minutes and then swim 50m freestyle in a light, long way, and then do 20 seconds of stretching. The purpose is to relax the body at the end of each drill by swimming freestyle in long, slow movements, and then stretch to elongate and relax the movement even more.

Lay on the water. Move your pelvis up and down gently until you run out of air. When that happens, bring your knees to your belly and stand up slowly. It’s very important to move the pelvis inwards, and not only outwards, because if you don’t, you will create a “worm” movement rather than a dolphin, and instead of releasing the back you will create pressure. In addition, it’s very important to keep the hands at the sides of the body throughout the movement to release the neck. If the dolphin kick is not good enough yet, putting the hands in an arrow will cause stress to the skeleton and lock the dolphin kick and our whole body with it.

Drill 2 – Dolphin on the waterline with fins and standing

Do the dolphin kick like in drill1, only this time with fins on. Here, too, the hands are relaxed at the sides of the body and dragged in the water. Try to move your pelvis up and down while keeping the fins in the water. After half a pool or a little before you run out of air you turn on your back and stand up.

Standing up and bringing the knees to the belly like in drill 1 can be difficult and cause pain to the lower back, if done with fins on, and so you must first roll on your back. Also it’s important while standing up to let the feet fall all the way down to the bottom, and only then lift your head.

If you feel comfortable doing this you can straighten the hands forward without a strong stretch and see if the motion is compromised. If not, you can continue with hands forward. If there’s pressure to the neck, return to doing the drill with hands at the sides of the body.

**This drill is also excellent for releasing the shoulders and neck.

Like drill 2, only this time, every time you move your pelvis up and down you make 2 shaking motions with your shoulders.

The goal of this drill is to relax the shoulders and neck to create an easier, more relaxed dolphin kick in the future. If the neck is stiff it’s hard to dive as part of the future motion.

The goal is to try to dive while performing the dolphin kick without pressure to the back. You push the wall at the waterline. The hands can be at the sides of the body or in an arrow. In the middle of the pool contract the body, which will cause sinking, and then work on a fast dolphin kick motion to keep sinking and get the body used to the full motion. When you can perform this well you can try to make the dolphin kick from the wall and try to sink immediately.

Drill 5 – Fast dolphin with hands in an arrow, with and without fins

The drill is the full dolphin kick with hands in an arrow. You put one hand on top of the other, locking the thumbs. Push against the wall, keep your head between your hands, or, if you have neck pain, the arrow should be a little below your face so as not to create pressure to the neck and back, and try to dive to the maximum. A little before you run out of air stand up rolling.

When you can do this well, try the same thing without fins.

It’s important to note that for 99% of Masters swimmers more than 2 dolphin kicks for 400m freestyle will cause the body to oxidize and eventually to swim slower.

The goal of building the dolphin kick through looseness, stretching and elongating is to create a better push off the wall without loss of energy, in addition to releasing the neck and back.

It is always recommended to learn the WEST freestyle swimming first and than learn the underwater dolphin kick.