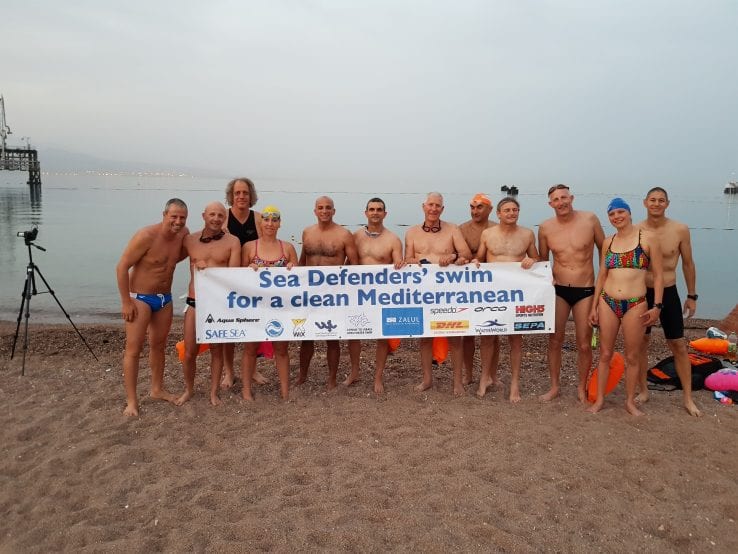 Many people say it is not possible to swim in 4 different Seas without flying?

When you have a goal of protecting SEAS the dream starts becoming alive.

For a long time now, I have been feeling that the Cyprus Israel team must do something different, something challenging, something with substance, in order to connect more people to the beauty of the State of Israel, to the love of the sea and to the preservation of the sea.

It all started over a glass of beer. We sat, the Cyprus gang, Udi, Oded, Luc, Doron, Ben, Yair, Erez, Avishag, Adina and me, and soon the idea came up – to swim in all four days of Israel. It was something that until that moment hasn’t been done, and slowly we realized that in order to make such a challenge particularly challenging, it must be done in a 24-hour framework, so that we would actually swim between 4.5 kilometers and 7 kilometers in each sea.

The logistics were hard, but everyone took part, especially Oded, who always took the organizational reins. There was a division of labor, and we all trained seriously. After all, it is not every day that you go swimming 24 kilometers within24 hours.

We have a crazy country, but it’s crazy beautiful, especially the sea. Every sea has its magic, and every sea is different, exciting and interesting in an unimaginable way.

Two months before the appointed day, we suddenly realized that the swim was approaching, and that it turned from dream to reality, and we also found a slogan that describes exactly what we feel:

Israel – you have to SEA it!

The long-awaited day arrived, and in twenty-four hours we went through a crazy, unique experience, but it wasn’t easy.

I’ll start with the first difficulty being the bus ride. Although our driver was amazing and fun, try to imagine a trip from Tel Aviv to Eilat, from Eilat to the Dead Sea, from the Dead Sea to the Sea of Galilee and from the Sea of Galilee to Tel Aviv, and in the middle add 6 km swimming in each area, and for a small addition slightly warm the atmosphere to 40 degrees.

The swim began in Eilat in the area of Kaza at exactly 6:00, towards the Dolphin Reef, and then back south through the Underwater Observatory. Aviv Levy, the manager of the observatory in Eilat, swam with us, and when we got to the Observatory we simply stopped by him and Aviv gave us a brief lecture about it, which was excellent.

In addition, we heard a rare lecture by Prof. Maoz Payne from the Eilat laboratory on the importance of protecting the coral reef and its impact on nature and the environment, and then we went straight to the Dead Sea. In case you didn’t know, the quantities of fish and rare marine life that exist in Eilat are such because of the maintenance of the coral, and not that the fish are fed.

At 12:00 we jumped into the Dead Sea, and the thought that everyone had was how to manage not to remove the mask, and how much you can survive without drinking and eating when it’s 40 degrees outside. Try to imagine for a moment that your body is relatively comfortable (29 degrees in water) but outside is a terrifying heat and your face in the mask sweats madly like in a sauna.

After an hour, each of us in turn broke down, but after the mask is removed, leaks of water start here and there, which is really fun.

And in the midst of all this, in one moment, without any explanation, we all stopped, looked at the sky, at the mountains. There was total silence. We held hands and really said thanks to nature.

The Sea of Galilee

We continued to the Sea of Galilee. Here, too, it was hot, even though we started at 18:00. Idan Greenbaum, head of the Jordan Valley Council, who is also a very strong swimmer, joined us. We hoped he would get tired, but it didn’t happen. When we left for Tel Aviv it was already night, but we were all excited about the last part of the swim. We knew we would meet the challenge.

The last part of the swim, in the Mediterranean, began at 4:00 AM, when we were all fatigued, exhausted, burned out and cramped. Unfortunately the sea was very high, and all the escorts decided not to enter the sea with us. Here came to play the amazing teamwork of our group, especially those of us who have attention and hyperactivity problems. 2 groups of 5 swimmers, for 6 kilometers, no one moved off the line and they all guarded the one next to them.It was exciting to see that whenever someone had to straighten their goggles everyone stopped at the same second.

When you swim at night in a stormy sea, you can’t tell the group that you are cold, that you want to go out for a quick swim in order to get warm, and immediately return to the line. The law was clear – starting together, guarding each other, and ending with everyone smiling – and so it was.

We hope that through this journey we will cause at least one person to guard the sea, pick up a plastic bag or collect garbage, and keep the sea clean.

We hope that we have reached people all over the world, and that in the future more people will come here to swim in Israel’s four amazing seas.

In my name and in the name of the entire group: Udi Arel, Oded Rahav, Luc Chetboun, Doron Amossi, Ben Enosh, Yair Palti, Erez Amir, Avishag Turk and Adina Faor, I would like to thank everyone who took part in this effort.

I personally took 10 days to recover physically from the swim, but the smile on my face from such a rare and moving group, and the amazing experience we went through together, has not yet come down.